Two former top civil servants have been handed jail sentences by the Court of First Instance in Sint Maarten on Wednesday, December 21, 2022, in a long-term investigation called ‘Seabass’. 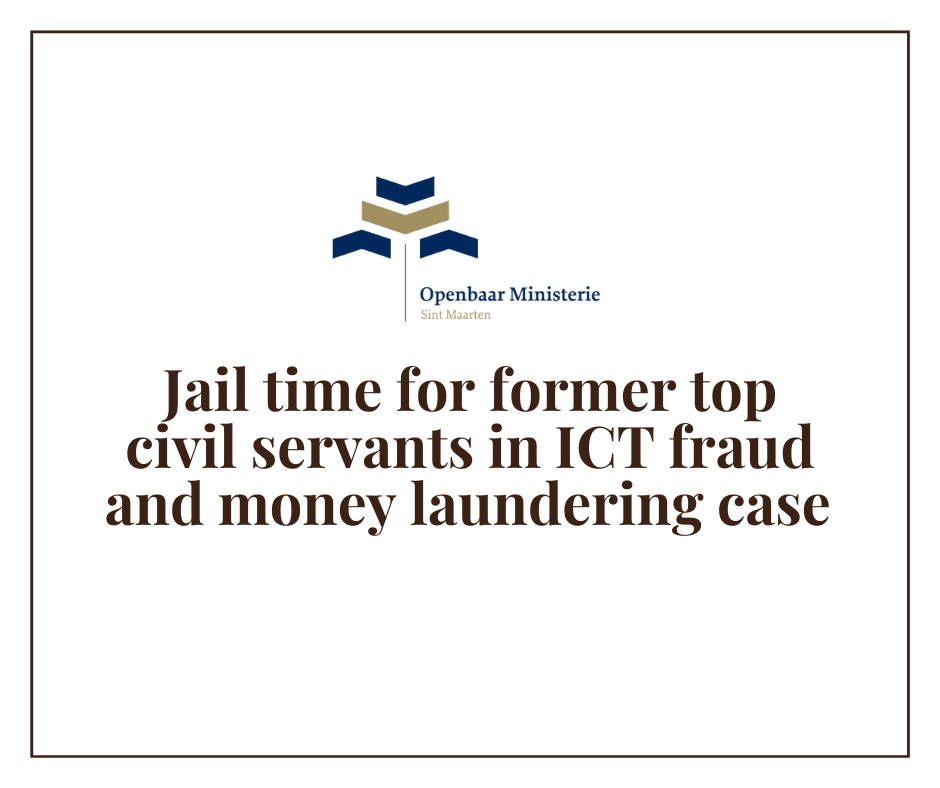 The investigation by the National Detectives (Landsrecherche) looked into fraud, embezzlement, abuse of their position and money-laundering regarding the bidding and tendering for information technology (IT) projects and the purchasing of computer hard- and software for the government of St. Maarten.

The Court sentenced the main suspect, former head of the government’s IT Department, M.D. to imprisonment of four years and nine months for fraud and habitual money laundering. The sentence is linked to M.D. abusing his position when awarding public ICT tenders in his role as Head ICT. Various projects were awarded to M.D. and/or companies owned by his relatives.

Another civil servant and co-suspect  J.L. was also sentenced in this case. He received a sentence of two years and nine months for fraud and habitual money laundering . A large number of government IT projects were awarded to co-suspect J.L.’s company Valmeer Management and Consultancy NV (VMC), and several other IT businesses owned by family members and relatives of M.D.

One of the owners of the other companies involved in this case, M.D.'s sister M.H.D, was sentenced to eight months’ imprisonment fully conditional with probation of two years and 240 hours of community service for fraud and being complicit in habitual money laundering.

The Seabass investigation is the result of an earlier investigation by the Tax Administration in January 2016, when the former head of the Tax Office informed the former Chief Prosecutor in St. Maarten of possible (fiscal) criminal behaviour by Effective Business Solutions & IT Consulting NV (EBS), founded by M.H.D.

The investigation by the National Detectives shows that the government of St. Maarten has been scammed by one of its own top officials and his co-defendants for years. Since 2010, M.D. has forwarded contracts for the purchase of information communication technology (ICT) products by the government to companies that were under his control.

The government of St. Maarten obtained ICT products against prices that were much too high, with sometimes inferior specifications and terms of delivery. The biggest focus of the case was the multi-million dollar ICT implementation project for the then new government administration building on Pond Island. Of that project, VMC alone received US $1.9 million.

From 2010 to 2019, M.D. and his co-defendants defrauded the government for an amount of more than NAf. 9 million. A large part of that money was transferred to shell companies in the US which were under M.D.’s control.